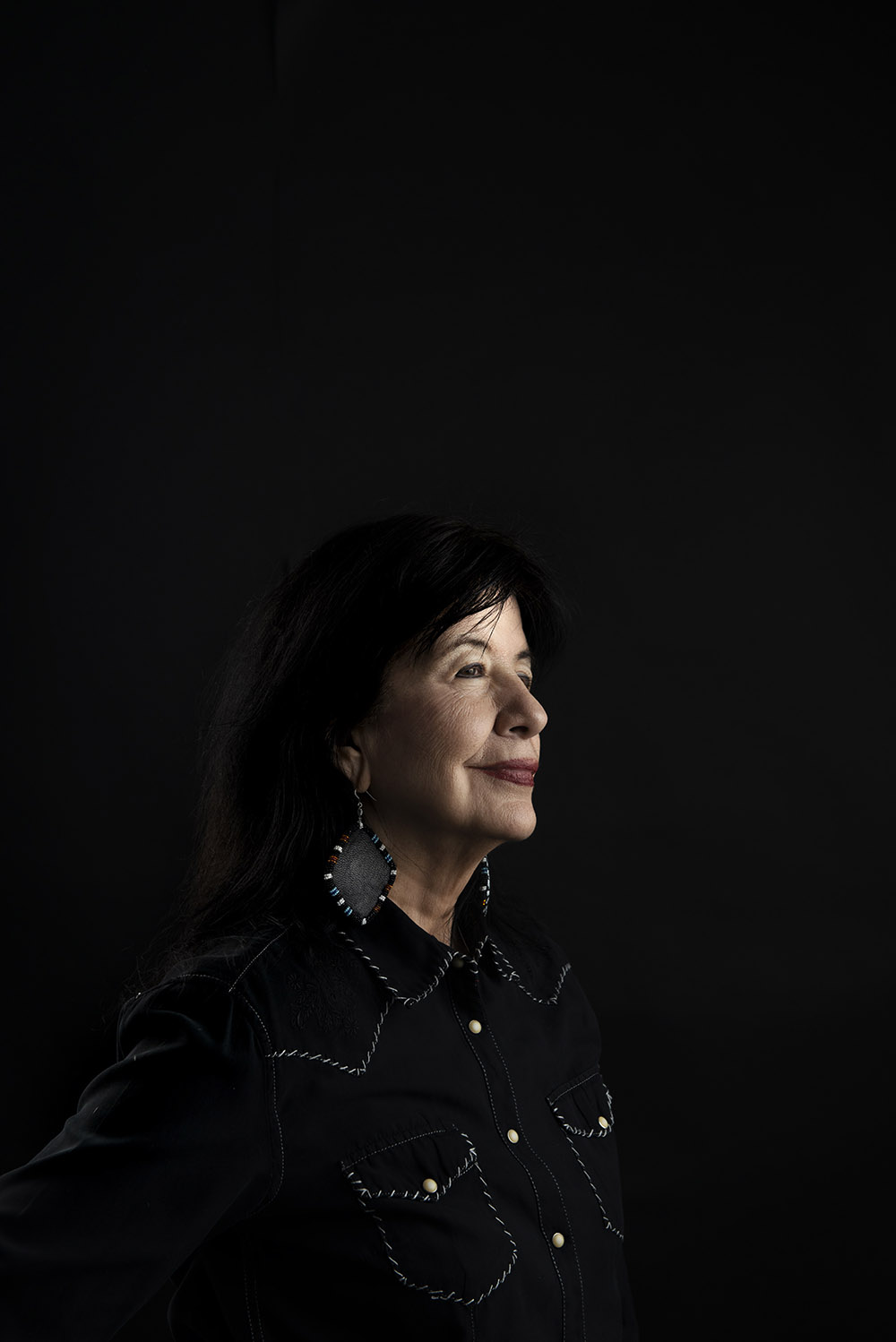 Born in Tulsa, Oklahoma, Joy Harjo is an internationally known poet, writer, performer, and saxophone player of the Mvskoke/Creek Nation. Her many writing awards include the Ruth Lilly Prize from the Poetry Foundation, the 2015 Wallace Stevens Award from the Academy of American Poets for proven mastery in the art of poetry; a Guggenheim Fellowship; the New Mexico Governor’s Award for Excellence in the Arts, the Rasmuson United States Artist Fellowship, and the William Carlos Williams Award from the Poetry Society of America. In 2014 she was inducted into the Oklahoma Writers Hall of Fame. On behalf of the judges of the Wallace Stevens Award, Academy of American Poets Chancellor Alicia Ostriker said: Throughout her extraordinary career as poet, storyteller, musician, memoirist, playwright and activist, Joy Harjo has worked to expand our American language, culture, and soul. A Creek Indian and student of First Nation history, Harjo is rooted simultaneously in the natural world, in earth—especially the landscape of the American Southwest—and in the spirit world. Aided by these redemptive forces of nature and spirit, incorporating native traditions of prayer and myth into a powerfully contemporary idiom, her visionary justice-seeking art transforms personal and collective bitterness to beauty, fragmentation to wholeness, and trauma to healing. Harjo’s nine books of poetry include such well-known titles as An American Sunrise, How We Became Human: New and Selected Poems and She Had Some Horses. Her newest collection, Conflict Resolution for Holy Beings (W.W. Norton, 2015), shortlisted for the 2016 Griffin Poetry Prize and added to ALA’s 2016 Notable Books List, is hailed by Yusef Komunyakaa as “a marvelous instrument that veins through a dark lode of American history.” Her memoir Crazy Brave (W.W. Norton, 2012) won several awards including the PEN USA Literary Award for Creative Non-Fiction and the American Book Award. It was called “The best kind of memoir, an unself-conscious mix of autobiography, spiritual rumination, cultural evaluation, history and political analysis told in simple but authoritative and deeply poetic prose” by Ms Magazine. Harjo is currently working on her next memoir, and she had a commission from the Public Theater of NY to write We Were There When Jazz Was Invented—a musical play that will restore southeastern natives to the American story of blues and jazz. Soul Talk, Song Language (2011, Wesleyan) is a collection of Harjo’s essays and interviews. She co-edited an anthology of contemporary Native women’s writing: Reinventing the Enemy’s Language: Native Women’s Writing of North America, one of the London Observer’s Best Books of 1997. She wrote the award-winning children’s book The Good Luck Cat (Harcourt), and in 2009 she published a young adult, coming-of-age-book, For A Girl Becoming, which won a Moonbeam Award and a Silver Medal from the Independent Publishers Awards. A renowned musician, Harjo performs with her saxophone nationally and internationally, solo and with her band, The Arrow Dynamics. She has five CDs of music and poetry including her most recent award-winning album of traditional flute, Red Dreams, A Trail Beyond Tears and Winding Through the Milky Way, which won a Native American Music Award (NAMMY) for Best Female Artist of the Year in 2009. She also performs her one-woman show, “Wings of Night Sky, Wings of Morning Light,” which premiered at the Wells Fargo Theater in Los Angeles in 2009 with other performances at the Public Theater in NYC and LaJolla Playhouse as part of the Native Voices at the Autry. In 2019 Joy Harjo was named the 23rd United State Poet Laureate. She lives in Tulsa, Oklahoma where she is a Tulsa Artist Fellow.